THE ELECTRIFICATION OF THE AMERICAN CAR

“We will not stop until every car on the road is electric.”   – Elon Musk

“…My fuel-injected Stingray and a four-thirteen. Revvin’ up our engines and it sounds real mean” – The Beach Boys

Is the love affair between America and the internal combustion engine over? Is the future of the American car all-electric? Many people emphatically say: “yes!”

Not so fast. The internal combustion engine (ICE) engine has been around for over 150 years. We grew up with it. We refined, recalibrated, and rebuilt it. We romanced it. We wrote songs about it. We made it faster. We made it louder. We made it quieter. But we never got tired of it. It was like an old friend.

Surprisingly, electric cars have been around for almost as long as gas-powered cars. In 1896, William Morris, an engineer from Iowa, built the first successful electric vehicle in the U.S. By the turn of the 20th century, electric vehicles were the rage, accounting for one-third of all cars sold in the country. They were quieter than gas and steam cars, easier to drive, and non-polluting. It looked like America was already electrified. So, what happened?

You can thank Henry Ford and his Model T. Introduced in 1908, the Model T was America’s first affordable car because it was built on an assembly line. Mass production made gas-powered cars much cheaper than electric cars. In 1912, an electric car cost around $1,750, and a gas-powered car only cost $650. Plus, the discovery of oil in Texas made the price of gas cheap, and by 1935, electric vehicles had all but disappeared.

Fast forward to today. Climate change is transforming a lot more than the environment. It has been the main reason for the popularity of electric cars. 29% of greenhouse gases came from cars, trucks, busses, and planes in 2019. Even though 25% of the emissions came from electricity in the form of coal, gas-powered vehicles were now enemy #1.

Electric vehicles (EVs) are not just environmentally sensitive anymore. They have improved significantly over the past few years. They run longer on one charge, they are faster, they are better looking, and better performing. Plus, the prices are lower, so electric vehicles are more affordable.

The number of EVs on U.S. roads is expected to be nearly 19 million in 2030, up from 1 million in 2018. This will be about 7 percent of the 259 million vehicles projected to be on the roads in 2030. EVs will make up 65% of new vehicle sales by 2050, according to Forbes. States like California intend to be all-electric by 2030. Whether this is possible remains to be seen.

American car manufacturers are finally catching up. Out of the Big Three, Chevrolet is leading the pack with a commitment to have 30 new global electric vehicles by 2025 and to be 100% electric by 2035. Ford isn’t far behind.  Even Fiat Chrysler (now called Stellantis) has switched gears since the late CEO Sergio Marchionne publicly dismissed battery technology.

However, new electric car companies like Tesla and Lucid have left the Big Three in the dust. Tesla’s value has hovered around $1 trillion in recent months and Lucid’s valuation is about $89.3 billion, far surpassing Ford.

So, what about the oil companies? Have they been asleep at the wheel? Yes and no. ExxonMobil is conducting research on breakthrough decarbonization technologies. Shell intends to become a net-zero emissions energy company by 2050.

By all indications, gas and electricity will coexist in the foreseeable future. The U.S. Energy Information Administration (EIA) says that 9% more oil will be consumed by U.S. transportation in 2050 than in 2020, even as electric vehicle sales continue to soar. It is a good lesson in how businesses need to be able to respond to social changes, foresee the future – and be able to turn on a dime. As Elon Musk once said: “When something is important enough, you do it even if the odds are not in your favor.” 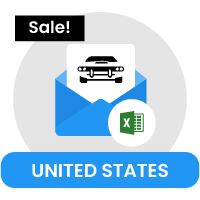 Email List of New Car Dealers in the United States